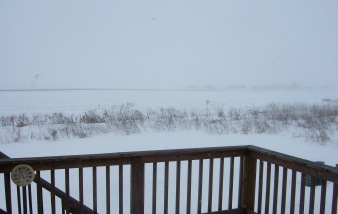 Woke up to another day of snow this morning, as this winter just keeps rolling right along. We can get out if we need—or want—to, so it’s not as though we’re “snowed in.” Today, however, it will just be easier to stay in and not have to navigate the streets and roads in and out of our small town. Living out here in northern Illinois, surrounded by open fields, we get a lot of blowing and drifting. Thus, the roads are often more treacherous than those closer to cities and larger towns and villages.

I don’t have a problem with any of this, by the way. It’s OK to be tucked inside today. After all, I have many long-neglected writing “chores” to attend to, and there’s really no place we have to be today anyway. So I’ll launch Scrivener, knock the cobwebs off my work in progress, and spend a few hours seeing if I can make some headway on the revision/rewrite of a story that just continues to hang on and beg to be finished–for better or worse!

Recently, I have read a couple of very good blog posts by blogging friends that have rekindled my desire to “hit the keyboard” again. There’s nothing quite as nice as reading how others cope with getting their writing jump-started. A special word of thanks goes out to Francis Guenette at her wonderful blog Disappearing in Plain Sight for her inspirational posts.

After spending time writing away the morning and into the afternoon hours, and after this current snowfall abates, I’ll go out and see about clearing the driveway and sidewalk. The current temperature of 25°F isn’t so bad, and the wind is minimal. The fresh air will be good. For now, though, let it snow, and let my fingers find the right words on the keyboard!

On another topic altogether, I’ve been reading—and enjoying—Bob Drury and Tom Clavin’s book, Valley Forge. I suppose, given our current weather, it’s quite easy to “get into” the overall tone and point of the book about that miserable winter of 1777 George Washington’s Continental Army spent there. But it would be truly unfair to compare anything of what we have to “endure” today with what these people suffered through during our Revolutionary War. Under supplied with food, clothing, ammunition, and shelter, they still managed to hang on and do what was necessary to achieve what they were fighting for–our independence.

The book is very good at illustrating how critically close to the brink of extinction Washington and the whole of the revolutionary forces were. As students and readers of history, we often gloss over the entire picture of the struggles and perils the Continental Army went through. Read this book to re-connect with the overall truth of that moment in our history. And even though I’m warm and snug as I read it now, it doesn’t hurt to have it cold and snowy outside—as a sort of tribute to those hardy souls who persevered–starved and half naked–at Valley Forge.

Other than our seemingly daily battle with the on again-off again snow, we’re at a pretty calm period of the year. It doesn’t look as though an annual late-February trip to Florida is in the offing this year.

I guess I can live with this, given that we had a marvelous January cruise to and thru the

Panama Canal. The memory of those glorious warm days of shorts, short sleeve shirts, and sandals will have to suffice until spring arrives around here in late March/early-April. I had hoped to take in a spring training game or two this winter down there in the Florida sunshine, but I’ll have to plan for that next year.

Time spent right around the old homestead is never a bad thing, and that’s where I’ll be. Happy rest-of-winter to everyone. Until next time, stay warm, all!

Add your thoughts or comments to our journey... Cancel reply