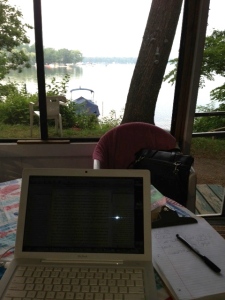 Up at 6 a.m., having my first cup of morning coffee (not out on the porch, however, ‘cause it’s damp and chilly out there), and knocking the cobwebs from my dear, old MacBook. And it’s the first morning that I don’t have anything that needs doing at any certain time today.

Yep. “Move-in weekend” has come and gone, and it couldn’t have been better, either. To say that the weather was outstanding would be understating things immensely! Plenty of sunshine filled each day, beginning with our arrival here early Friday right on through Memorial Day on Monday.

There was not the slightest hint of a storm until late Monday evening. By that time, everything was in its place, Carolyn’s annual planting complete, and the pontoon all covered and moored in its usual spot down the slope below our 101-year-old cottage.

When the season’s first storm did roll in late Monday night, it had its normal share of wind as well as a drenching rain. It was no big thing to roll down the porch blinds that keeps things somewhat dry, and I remembered the visqueen, that polyethylene sheeting, that we always use to cover the futon when a storm is near.

So when I crawled into bed, tired, achy, and worn out from all of the weekend’s tasks and physical challenges, I felt pretty good about having everything buttoned up and secure against the thunderstorm that was now hitting us with pretty good force. Let it rain!

I’m not sure exactly when it was—around 3 a.m., perhaps—that I remembered that I had done nothing to secure our pier furniture, consisting of a few plastic chairs, a couple of footstools, and a small table. I’d forgotten all about them as they sat right where I’d placed them the day before after a much-needed bath in the lake.

Whenever there’s wind of any sort, the chairs and table are not going to win out. Instead, they’ll be blown off the pier and end up along the shore, which—thankfully—is close and in very shallow water. As I lay there remembering my failure to bungee cord the pier furniture, I knew I’d be getting in the water for an early morning “search and rescue” mission in a few hours. With that it mind, I rolled over and went back to sleep and listened to the rain on the roof.

A few hours later, as the dawn of a new day arrived and the storm from the night gone, I came down and got the morning coffee going and put on my water shoes. In the early light of the morning, I could see that a couple of chairs that had been stacked together had remained in place, as well as the two low footstools, but the three other chairs and the little round table were gone.

And so I went down to see what I could see. Sure enough, the three chairs were resting against the shoreline not far from where I was standing on our pier, and I could see that the little table had traveled farther, to the end of the pier two cottages down. No problem at all. I stepped off into the shallow water and retrieved our chairs and table and returned them to the pier and tied them down with a cord I’d brought along.

A few minutes later, I was back in the cottage and having a wonderful cup of hot coffee. The day ahead promised to be a good one for getting some reading done and to get things going for my writing routine for the summer. This post is the first effort along those lines.

There are a few little tweaks and adjustments needed to finish the move-in process, and I’ll be attending to them today. In the meantime, another cup of coffee is in order….CortlandWriter

Add your thoughts or comments to our journey... Cancel reply